Voice, Guitar, Songwriting and Piano lessons for adults and kids in Los Angeles

Harrison is originally from Washington DC and began studing music at the age of 9. His passion for music has been growing ever since. Harry attended Berklee College of Music and is described as a saucy performer. His knack for catchy, soulful hooks, dubbed “yacht-hop,” makes him artist that audiences love watching. This style of music draws influence from Steely Dan and Marvin Gaye. While Harrison’s first solo single “Tribeca Falls,” shows off Harry’s noted 4+ octave vocal range, he also plays piano and guitar.

Harry believes a music instructor can be one of the most important role models in a person’s life; allowing the student to open many doors in their life. He approaches teaching from the student’s perspective and gauges whether or not they would like to learn by ear, or by reading, while still including elements of music to push the student forward. Harrison teaches jazz, rock, funk, R&B, soul, and pop with his voice, guitar and piano lessons for adults and kids in Los Angeles.

"As a teenager having a bit of music background, I came into group lessons wishing to better technical and overall skill on piano and guitar. Harrison has been an absolutely amazing teacher. He has so much patience and is always supportive of all his students."- Gloria M. 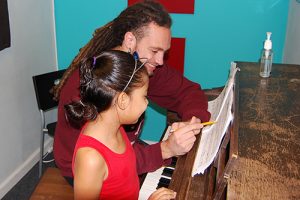